The French Riviera is a perfect destination for tourism in all seasons: the slow rhythm of autumn enables you to find out magical corners.

For the majority of people, the French Riviera is the perfect destination for a summer holiday:

but once the drunkenness and the crowd of warmer months have passed, it becomes possible to calmly discover the beauty of its villages.

Starting from the city of Menton, perfect to stay on board of a boat moored in the port: the city with the most temperate climate in the country, a village of citrus fruits and parks.

Thanks to this particular climate the city can hosts 7 gardens, where nature and architectural heritage blend harmoniously.

Not less important the garden of Palais de Carnolès, which hosts 167 varieties of citrus fruits, starting from his majesty the lemon, the symbol of Menton and protagonist of the festival whose next edition is scheduled for february 2020.

Nice, the capital of the French Riviera

From Menton it is easy to move to Nice, the fifth city in France, considered the capital of the coast and full of cultural and social events throughout the year.

Restaurants, bars, shops, markets and museums are open during the whole year and offer in this season what has been called the “Indian summer”, characterized by the sun, the mild climate and the particular light that illuminates the various corners of the city and which it has been a source of inspiration for many artists.

Walking calmly along the streets of the city, enjoying the slow rhythm of autumn is a unique experience, waiting for the Carnival follies, which starts in February and unleashes over three weeks.

Antibes, the city of Picasso

And from Nice you can not miss going to Antibes Juan Le Pins, the village that inspired some works by Picasso, which can be admired in the museum dedicated to the artist.

The climate allows swimming even off season, avoiding the crowds of July and August, but for sure the old city is the one that offers the most beautiful shows.

Walking through the scents which already evoke Provence until you reach the Bois de la Garupe and the chapel of Notre Dame hidden among the vegetation.

It is really an incredible discovery of how these places of the French Riviera reveal their beauty even in the light of autumn . 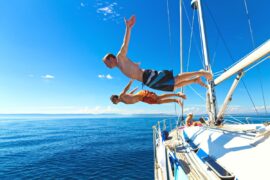 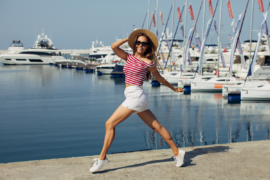 A walk in the Marina: a promenade with unique charm 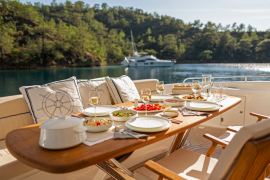 What to cook on a boat? Flavour and simplicity on board